November 3, 2017 - The Cleveland Water Alliance, in partnership with Digital C and US Ignite, awarded $50,000 in cash as well as additional supportive services to Team GLASS, Team Extreme Comms/MicroBuoy, and Team HydroTrek at the Internet of H20 water innovation competition today at the Catawba Island Club.

The competition challenged three communities to come together to solve for real-world issues and establish a Smart Lake strategy that requires the integration of sensors, advanced networking and insights generated from data science.

The goal of the competition was to generate robust and resilient nutrient monitoring pilot programs that have the potential to expand across the Great Lakes and help establish Lake Erie as the first Smart Lake. Farming practices and severe weather can increase the amount of fertilizer-derived nutrients in the water, which diminish water quality and threaten the lake's ecosystem and the public's health.

Congratulations to Teams Extreme Comms and MicroBuoy, who are both made up of students from Wayne State University!

The Fall 2017 Water@Wayne events have been announced. This seminar series occurs on some Thursdays from 2:30 to 3:30pm throughout the semester and includes speakers with a wide-range of backgrounds discussing water-related issues. This event is supported by the Office of the Vice President of Research.

July 26, 2017 - Congratulations to our Co-Director, Donna Kashian, who will be leading "NRT: Transformative Research in Urban Sustainability Training (T-RUST)". This grant will train master's and doctoral students to work with communities, busininesses, industries, scientists and policy makers to address challenges faced in postindustrial urban settings and prepare them for public, private and academic leadership positions.

July 21, 2017 - Congratulations to our co-director, Jeffrey Ram, who will be the principal investigator on a program to detemine if a public institution can increase student interest in science, technology, engineering, and math careers.  This program will be a partnership between the Belle Isle Conservancy and Wayne State University, the latter of which will complete this study entailing measuring the impact of the field strips on students' attitudes towards STEM and related careers.

The Great Lakes Protection Fund (GLPF) and American Water Works Association (AWWA) recently announced the finalists in the Water Utility Energy Challenge (WUEC), an innovative program which engages water operators in a competition to reduce the emissions sourced in their energy generation. The inaugural 2017-'18 competition, focused on the Great Lakes Basin, is aimed at connecting the utilities with new innovative software while fostering an awareness of the associated emissions, particularly mercury. The finalists are the District of Muskoka in Bracebridge, Ontario; the city of Highland Park (Illinois); the city of Ann Arbor (Michigan); the Great Lake Water Authority of Detroit, Michigan; Onondaga County Water Authority of North Syracuse, New York; and the city of Bayfield (Wisconsin). Healthy Urban Waters is on the project team for this competition. 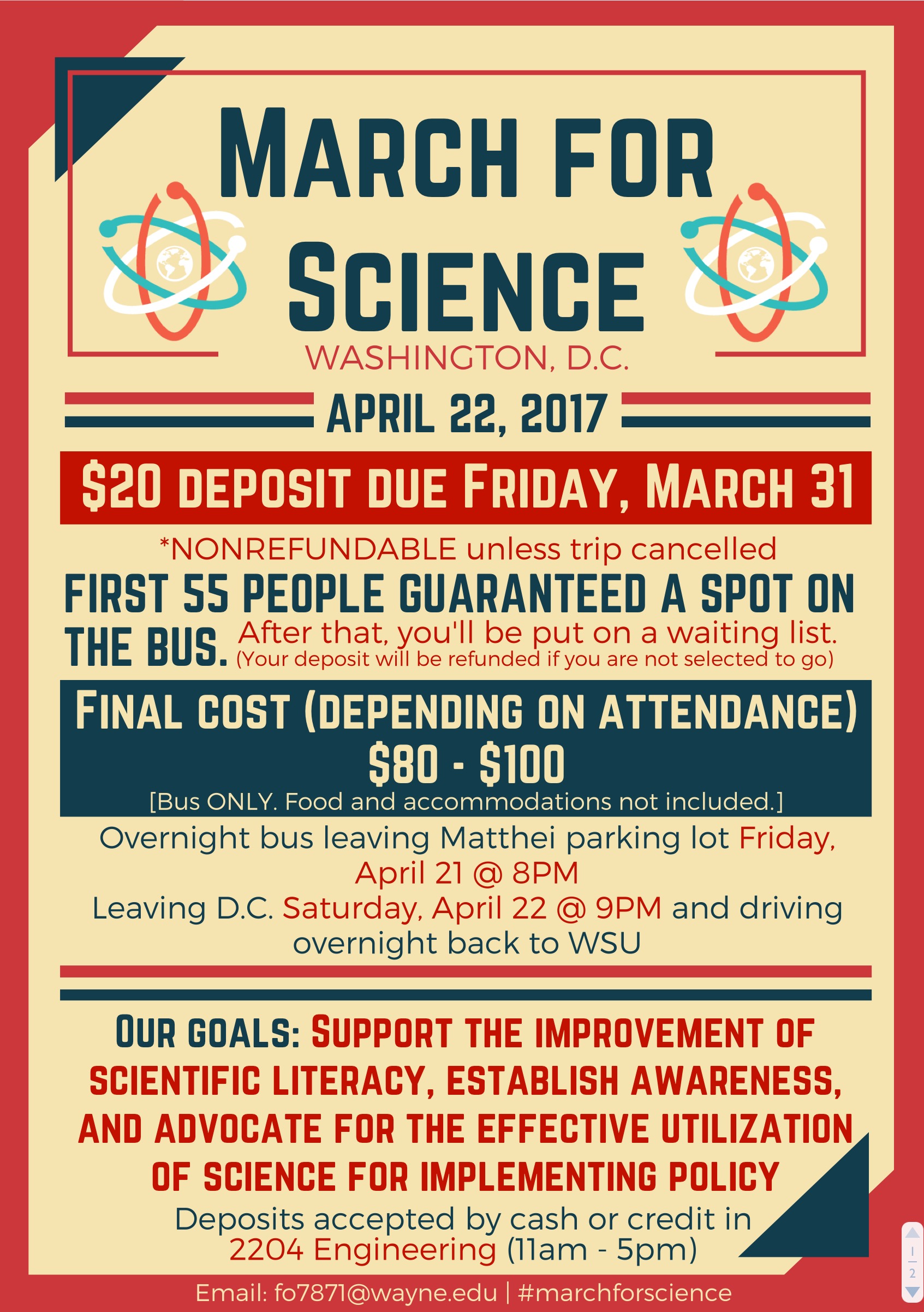 Mar. 31, 2017 - Wayne State University science community assembles delegation to support the March for Science on April 22, 2017 in Washington D.C. In addition, the March for Science Detroit will occur in Hart Plaza to march in support of scientific research, education, and evidence-based policies.

Q&A: WSU's Carol Miller on the interplay between green and gray infrastructure

Job Opportunity with the City of Detroit

Job Opportunity with Friends of the Detroit River (FDR)

Nov. 21, 2016 - Friends of the Detroit River is accepting applications for Community Outreach specialists for initiatives in partnership with Michigan Department of Health and Human Services' (MDHHS) Fish Consumption Advisory Program.

Attends events and activities to promote and educate on FDR Projects and Fish Consumption Advisory Program. Maintains a positive, strong, credible, professional and interpersonal relationship with all parties relevant to MDHHS and FDR projects, and represents the best interests of MDHHS and FDR at all times.

To request a detailed job description, ask questions, or submit resume, please contact Friends of the Detroit River at river@detroitriver.org or 734-288-3889 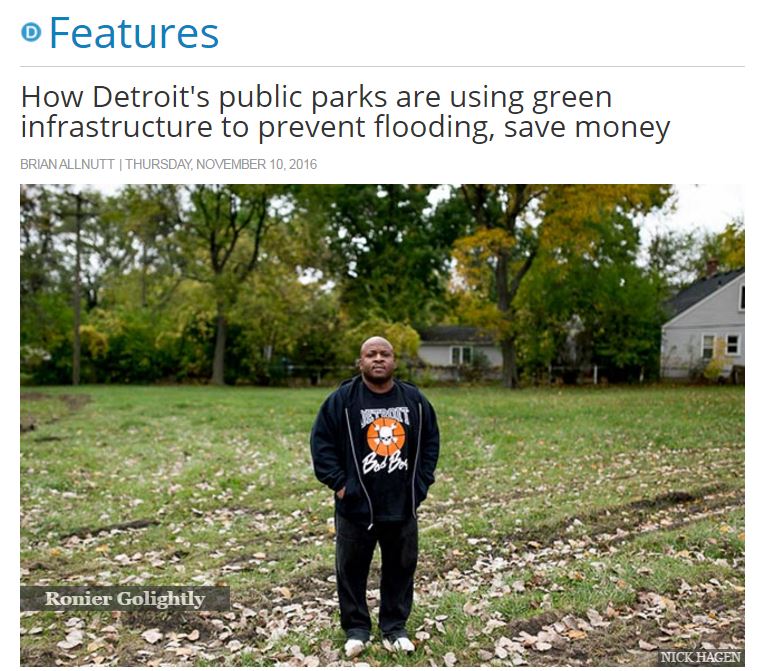 Nov. 10, 2016 - This featured story from DMode reports on green infrastructure updates planned to enhance Viola Liuzzo Park as part of the DWSD 2016 Parks and Recreation Improvement Plan. This plan includes a bio-retention garden, which will infiltrate water into the ground and prevent the water from entering the combined sewer system during rainstorms. In addition, it will add a more natural effect with plantings, bring anaimal habitat and environmental diversity to the park.

"It's Miller Time: Meet the Detroit educator who's helping solve water issues around the country"

Sept. 20, 2016 - Model D Medial interviews Carol Miller about her work and research in relation to urban water issues in the region.

Water is the new gold

More than 2,000 miles away from the luxurious cool of Michigan's five Great Lakes, WSU alum Saad Merayyan is now where he is needed the most.

January 1, 2016 - The LEEM Team, a cross-disciplinary group of researchers from UWERG and HUW have been selected as one of 50 finalists for the The 6th Annual North America Chinese Startup Contest and Accelerator. The final rounds will be in Santa Clara, CA on January 14-16, 2016. Participating on the team are WSU students and faculty: Dr. Caisheng Wang (ECE), Dr. Cheng-Zhong Xu (ECE), Dr. Carol Miller (CEE), and Guoyao Xu (ECE).

The LEEM Team is presenting a technology that can be used to selectively reduce mercury emissions (sourced in electrical energy generation) to the environment. LEEM is an acronym for Locational Emissions Estimation Methodology. Numerous students and faculty at WSU and elsewhere have contributed to the development of the technology that will be further vetted at this competition. In addition, Pacific Northwest National Labs (PNNL) is evaluating LEEM for their next generation emission tools. Funding for LEEM has been provided by Great Lakes Protection Fund and others. Student participation in this US/China start-up competition is provided by the Anderson Institute at WSU.

The North America Chinese Startup Contest strives to foster cross-border collaboration on market and investment opportunities, as well as career development for startups between the United States and China. The past five contests have drawn over 10,000 attendees and 2,000 startup teams combined, of which over 200 received initial funding and/or started collaboration with a Chinese counterpart. 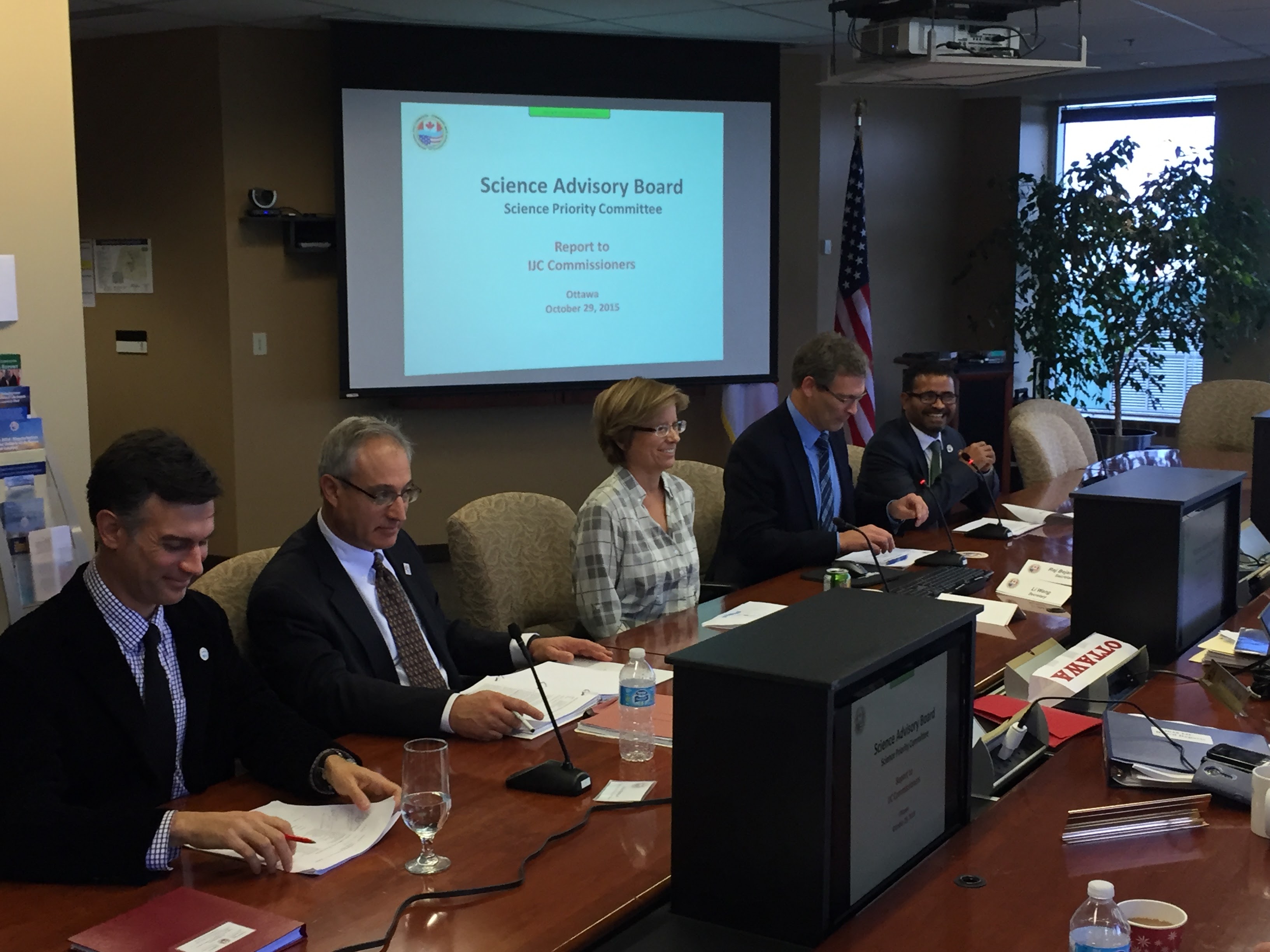 October 2015 - Dr. Carol Milller (WSU Civil and Environmental Engineering) and Dr. Jeff Ridal present as US and Canadian Co-Chairs to the International Joint Commission held in late October 2015 in Ottawa. They presented a report of the Great Lakes Science Priority Committee (SPC) to the Commissioners. 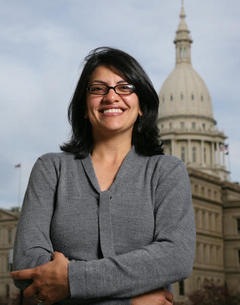 Environmental Challenges in the Urban Context: A Legislative Perspective

October 15, 2015 - Rashida Tlaib visits Wayne State to present at the 4th Annual Eugene Perrin Memorial Lecture In Health Sciences & Peace as part of the Food-Energy-Water (FEW) Nexus workshop hosted by WSU, the National Science Foudation, the US Department of Agriculture Forestry Department - Maryland, and the WSU Center for Peace and Conflict Studies. 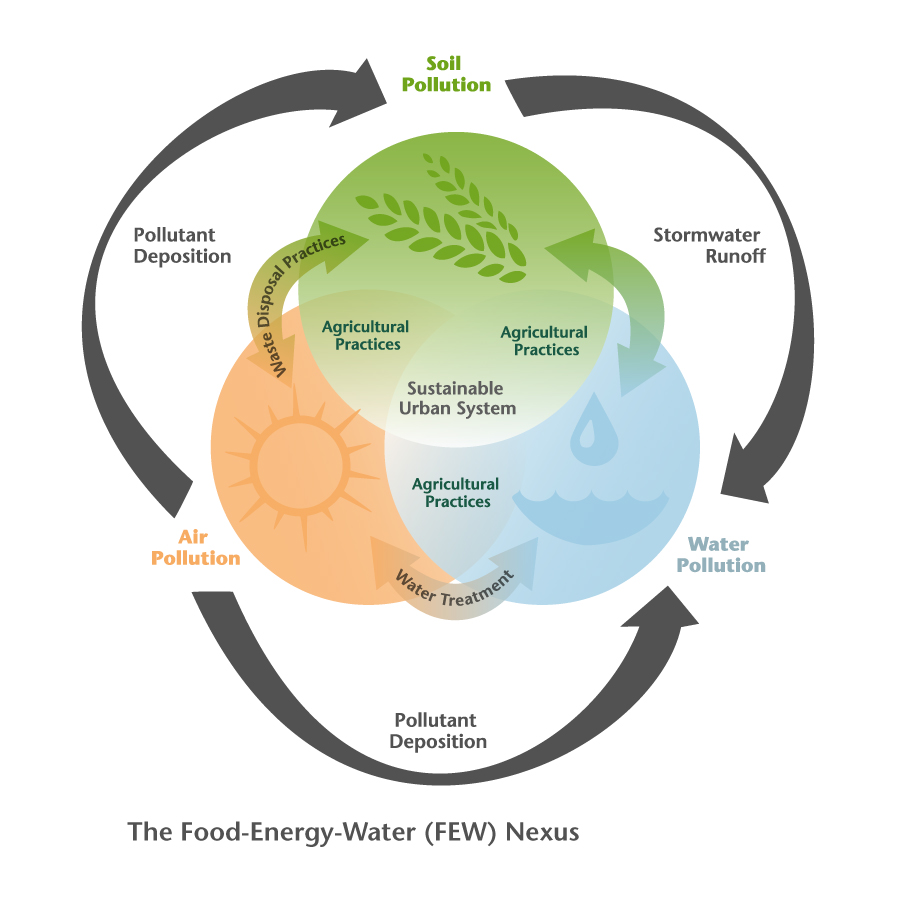 October 14-16, 2015 - "Integrative and Sustainable Food, Energy and Water (FEW) in Transitioning Urban Landscapes" invited participants from Detroit and Baltimore, MD who exchanged ideas, strategies and concerns about current practices and future plans for Detroit, Baltimore and other transitioning cities. This Food-Energy-Water (FEW) Nexus workshop was hosted by WSU, the National Science Foundation, the US Department of Agriculture Forestry Department - Maryland, and the WSU Center for Peace and Conflict Studies.

October 5, 2015 - Construction workers are busy installing concrete bollards intended to prevent illegal dumping at the new bioinfiltration site on Evergreen Road in the Cody Rouge Neigborhood, Detroit, MI. Some of the plants are in already and the grass (and manhole covers) are coming soon and more information are coming soon!

October 13-14, 2015 - Dr. Carol Miller from WSU Civil and Environmental Engineering presents innovation in emissions tracking and reduction and will be talking about Locational Emissions Estimation Methology (LEEM) with the talk, "New Tools for Emissions-Targeted Demand Response" at the National Summit on Smart Grid and Climate Change in Washington, D.C.

September 29, 2015 - Dr. Shawn McEllmurry speaks about green infrastructure with a positive impact on water quality. The conference was live-stream broadcasted by Detroit Public TV and can be viewed here.

Evidence for Water on Mars!

Water In Its Place

June 16, 2015 - New video "Water in its Place" as presented to the Leadership Summit of the Great Lakes and St. Lawrence Governors and Premiers.

This video comes from GL & SL Governors and Premiers on Vimeo.

June 5, 2015 - The Erb Family Foundation has approved UWERG's Healthy Urban Waters program and will provide $650,000 for the next three years of the project for studies on urban watersheds. Stream Map from the book and featured on Detroitography.

April 2015 - Jenna Hage-Hassan defends her Masters of Science thesis, Impacts Of Anthropogenic Watershed Activity On The Sedimentary Record Of Dams From The Midwestern United States: A Case Study From Michigan And Indiana. 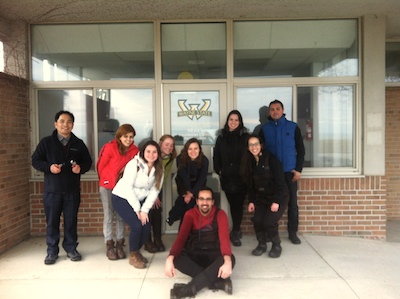 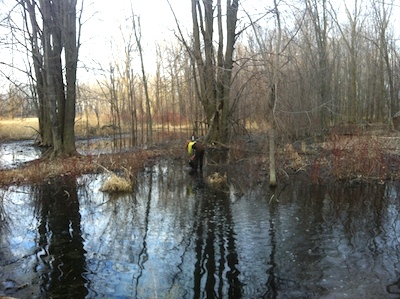 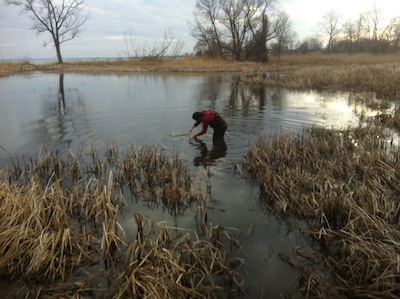 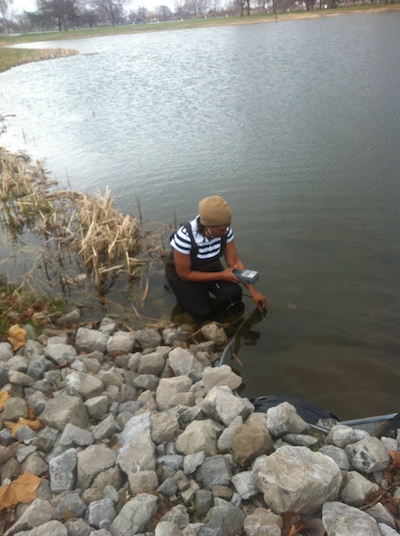 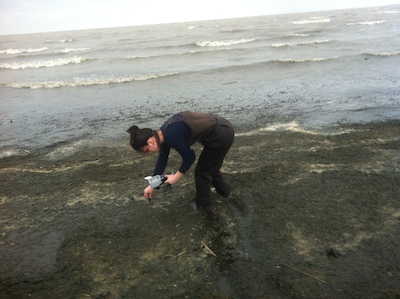